Skip to content
HomeSome photos from around St. Augustine…

It’s Bike Week here in St. Augustine, which means the city is packed with bikers and wannabes. Now when you think of bikers you generally think of ‘Leader of the Packs’ with lots of muscles, leather and hair. Well, there are lots of the latter two characteristics around, but their mostly attached to 50-something guys (and women) with post-middle-age spreads.

There is lots of noise, too, but it’s mostly from the bikes. However, there are exceptions. Six women came into Sluggers last evening, and for a while I thought that I had stumbled in a scene from Macbeth. These broads–each with a voice that could etch glass–were 3/4’s corked when they arrived, and proceeded to get even worse (and louder) as time went on. Finally, I simply got up and left.

I got a chance to go on a tour of the city to day, and of course I took my camera along. Because the city was so crowded we didn’t stop, but I managed to take a few snapshots anyway. 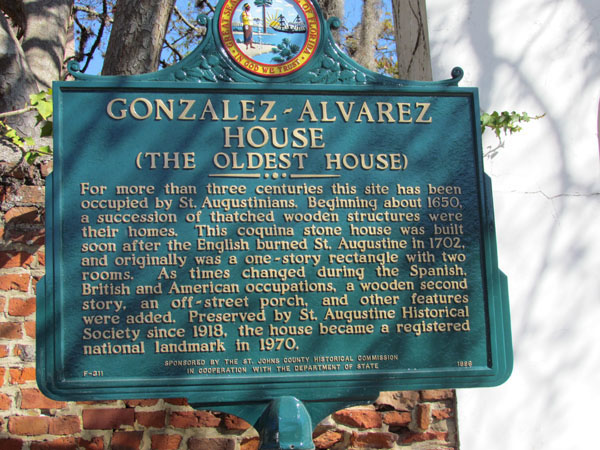 As you can see (above), this the plaque outside the oldest existing house in in St. Augustine.

And this is it. Built around 1702, the second storey is a later addition. However is remarkably substantial for such an early period. 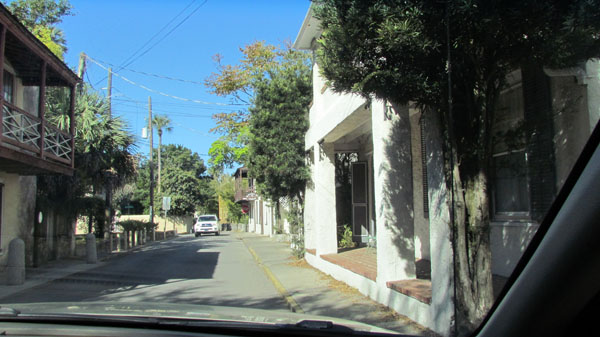 The is a typical streetscape on the same street as the oldest house.

This is the Flagler Memorial Church. Henry Flagler was one of the founders of General Motors and a major developer of St. Augustine. This church was build as a memorial to his daughter who died quite young. Amazingly, this entire structure was built in two years. Flagler and his wife are also entombed here.

This gives you a better idea of the massive structure it is.