The road to hell is paved with good intentions, and mine are right up there.

It’s been either raining or cold (frost last night), so I’ve been doing some heavy-duty writing, and once I travel back to the 1800s I tend to lose contact with the present. I’m making progress, though, although you can’t see in my page count. It’s mostly reworking scenes to make them more credible.

As I say, it is cool here, but nothing like the north country that hasn’t seen a temp above freezing since December–Orillia 3F today, and Urbana 21. What a bummer! I have been heard to say that you can always get more of what you don’t want, and winter is sure living up to that maxim this year. Yikes.

There is no news, per se. I have a tooth that is just on the verge of trying to ache, but isn’t. I carry both penicillin and pain killers with me just in case, so if it starts to act up I’ll dose it with penicillin.

This weekend the old mission (Nombre de Dios) is having its festival. It’s a colourful event that celebrates the history, etc., in costume, so I might wander up there with camera in hand. The weather looks promising (70s), so it will make a nice outing.

A steady drizzle has set in, and it looks like it is here for the duration. Also, the temp has dropped considerably from yesterday.

I still don’t know where the post went from yesterday. Obviously it’s some place because I was able to retrieve it through FB, but it remains a mystery.

I am beginning to develop a complex. It seems wherever I go, it closes for construction. My original hotel is closed for a year-or-so due to renovations, and now the dining room at this hotel will be closing to install a bar. Hopefully, that won’t happen until after I leave.

Glad I did my beer run yesterday, and since going outside is out of the question, I’ll devote the rest of the day to writing.

I still don’t know where it went, but fortunately I had shared it on FB and when I checked it cam up. So, it’s there someplace, but who knows where?

Anyway, I copied it and here it is:

I see the north country is back in the deep freeze–5F this morning [Tuesday] . Is it never going to end?

Nice day here, between the rain drops. Going to do a beer run in a few minutes because there is more rain in the forecast for tomorrow. My motto is: Better to have it and not need it, than to need it and not have it. Works for me.

Yesterday [Monday] was book review day, and so I spent the day doing that. Besides, it rained for most of the day. I heard the tornado siren for the first time on Sunday. Likewise the Indie 500 was evacuated in the middle of the race because of it. However, fortunately, nothing transpired.

A bunch of tourists arrived yesterday afternoon. They were an older crowd, but the nastiest old farts I have ever encountered. One old, hatchet-faced broad caused a bit of a ruckus over dinner. She complained to the assistant manager because her food wasn’t coming in time, and complained that the waitresses were rude. Rude?! One is the product of a convent education, and a more proper lady you’d not meet anywhere. The other is about the same. But this old battle axe had all the charm of a spitting cobra. Moreover, I told the manager so.

The frightening part is that she probably raised a brood to be exactly like her. Perish the thought.

Off on my beer run. More next time.

I wrote a fairly long post today (yesterday, if you’re viewing this tomorrow) and somehow it disappeared.

Not a problem, however, since I have enough to last me until tomorrow. However, there’s rain in that forecast, too, so I may have to dodge the raindrops eventually.

Not a lot to report. The hotel was busy this weekend for the Indie 500. A lot of people stay in St. Augustine and drive to Daytona. Nonetheless, it was quiet, noise wise–not like at Faulty Towers.

Still struggling with the formatting problem–a la Microcrap. I’ve taken to the web to find answers, and I must say there is better instructions on there than there is on MS-Help (which is no help at all.) The reason I want to master it is because I want to design my own interior for Coming of Age. Therefore, I will work on it a bit more today  before I settle down to write.

The temp is up and down like a toilet seat. Mind you, it isn’t all that bad at 62.

For machines that are supposed to be the great time savers, computers waste more of my time than any other device I own. Of course, Microcrap is partly to blame by making things so damned complicated (…in addition to the downright glitches.) I  spent most of yesterday afternoon trying to get the ‘page number’ and ‘header and footer’ options to work the way I wanted. Moreover, their ‘helpful’ instructions only made matters worse.

As of now, 24 hours later, I figured out one aspect of it with a half-dozen to go.

And on the topic of computers, the hotel very kindly provides a computer and printer in the lobby. So knowing this I went to print off a presentation copy of the first few pages of my new novel for a friend. Well, firstly it doesn’t have a disk drive or a USB port, so I uploaded the file (…the same one I was having difficulty with yesterday) onto Sky Drive–thinking I could just print it from there. Nope. Microcrap has set it up so that you have to download into the original program to get full functionality–like print.

Okay, I figured out a way around that only to find out the printer had run out of ink half way through. Errrgh!!

It’s raining, with some heavy rain alerts to the north. It’s the same until Sunday. I don’t mind the rain so long as it is mild, but unfortunately there is no covered area outside where I can work.

However, I have a fairly good view of the outside–although the scenery is nothing to mention. 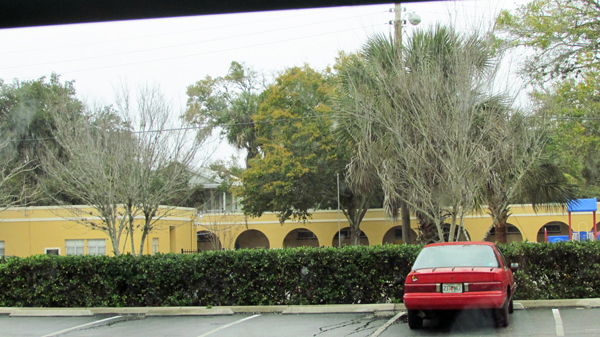 That building across the road is a school, by the way, (just my luck), but for the most part the screaming little monsters are inside. The house behind it, the one with the typical second-storey balcony, looks intriguing though. 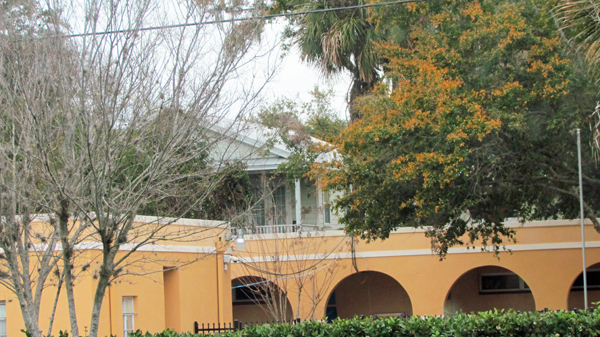 I must take a walk over there sometime.

Although there are storms all around us, our little neck of the woods seems to be protected from all this. However, it’s getting major dark out right now, so maybe I spoke too soon.

PS: I did speak too soon, but it was only a mediocre storm. 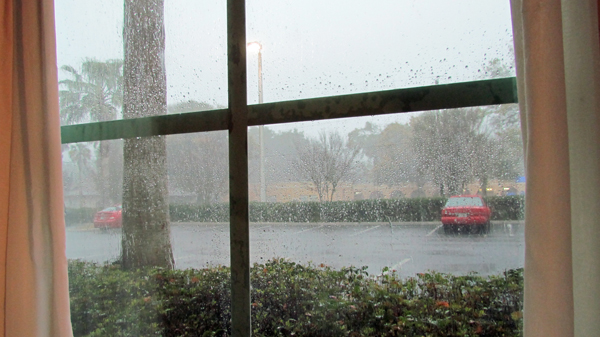 As I have said before, the pool area is pretty plain-jane: Small, rectangular, and with a very small poolside, but I have it all to myself.

After the long weekend rush things are fairly quiet at the hotel. Kids are all gone, thank goodness, and only a few passers-through. They are mostly older, very quiet, and quite delightful with good manners. There are some exceptions, however–like the pair of old sour pusses at dinner the other evening. They came in five minutes before the dining room closed, gave an order that was more don’ts than dos, and then complained when it didn’t arrive in thirty seconds. Both the hostess, Maryann, and Joe the chef (6′-3″, 300 lbs.) were about ready to toss them out.

Did my beer run this morning. It’s about a mile the way I have to travel (to reach a crosswalk). Ironically, if I had a straight run without getting run down crossing the street, the beer store is only about 15 min. from here. Even using the crosswalk, however, some drivers go barrelling through, anyhow.

When the weather starts settling down I’m going spend an afternoon in the old town–with camera.

The temp is heading toward lo 80s, but right now it already feels comfortable. I’m working beside the pool and about to crack my first beer of the day.

I can mention this because I  see the temp in Orillia is heading toward 39. Okay, I know that is a long way from 80, but it’s also a long way over -39, so we take our blessings where we can find them.

I’m undertaking to do my own interior design for Coming of age, and so I have found some Frederick Remington sketches as chapter headers. Here’s what they look like when they’re in place.

Rancher Spencer Twilingate smiled proudly as he watched his seventeen-year-old son, Cory, expertly cut a range-bred steer from the herd. Both he and his favourite cutting horse, Shaman, were as one as they deftly moved to counter every shift the stubborn creature could make until, at last, it was eventually forced to submit to their will.

I think it adds character, and it is in keeping with vintage cowboy books that all had hand produced illustrations.

So, today will be devoted to writing, and taking advantage of the good weather. I’ve finished Part One (the development stage) and now I’m just starting Part Two, which is the cattle drive itself. It should go more quickly, but there is still development that has to be done, i.e. Cory and Reb’s relationship has to deepen into love, and the mythical part gradually fed into the mix. Oh, and I have some great page dividers, too…

So, I think it will look a heck of a lot better than letting the publisher do it. To them they just want to print it as cheaply as possible,

More next time, and THINK SPRING!

Depending on the breeze, I may get to work beside the pool. I tried to yesterday, but it was just too cool for comfort.

Judging by breakfast, the hotel is still quite busy. No kids this morning, though, for which I am truly grateful. I take my small computer with me so I am able to catch up on the news and emails, etc., while I eat. The, while I’m out the housekeepers tidy my room so that I am not disturbed when I come back to work. It’s a good arrangement.

I see there is another storm tracking across the mid-west, but fortunately neither Orillia or Urbana is in its path. In fact, Orillia may climb above 0C for the first time in a month (at least). Good to see that.