A teenager’s coming of age tale on an epic 1,500-mile cattle drive through the primordial wilderness of 19th-century British Columbia. 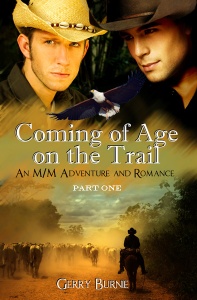 LOOSELY based on an actual cattle drive from Hanceville, British Columbia, to Canada’s remote Yukon Territory, this fictional tale pits 17-year-old Cory Twilingate against the 19th-century wilderness in order to save his father’s cash-strapped ranch.

Accompanying him on this epic adventure is the ranch foreman, “Reb” Coltrane, a ruggedly handsome cowpoke from down Texas way, and together they form a bond that is both steadfast and enduring.

Woven into this tale, is an ancient Indian legend of two star-crossed lovers who are cruelly separated by an evil spirit, but whose love endures throughout an entire millennium as their spirits search for one another.

Also lurking in the background, are an assortment of villains intent on doing Cory and Reb harm. Included are a powerful raven spirit, a homophobic serial killer, and a vengeful rancher who has vowed to destroy both Cory and his rancher father.

Although written in the classic western style, it is a cattle drive with a distinct difference.

Presently available for purchase at the booksellers Amazon and Barnes and Noble.