Nor All Thy Tears: Journey to Big Sky 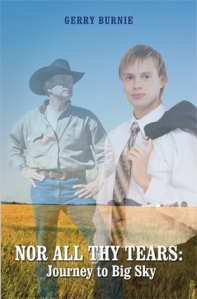 Sheldon Cartwright is a young, exceptionally handsome and gifted politician with a beautiful wife and two charming children. His career is also in ascendance, and given all that the sky seems the only limit to this talented, blue-eyed lad.

However, Cartwright also has a hidden past that one day bursts onto the front page of a tabloid newspaper with the publication of his nude photograph. Moreover, the inside story alleges that he was once a high-end male prostitute with a romantic connection to an ex-con whose body has been found mutilated beyond recognition in a burned-out apartment—the suspected victim of a blackmail attempt gone wrong.

Enter a homophobic cop who is willing to go to any lengths to tie Cartwright into the crime, simply because he is young, handsome and well-educated. With his career in a crisis, and his personal life as well, Cartwright is unexpectedly joined by an ally in Colin Scrubbs, a ruggedly handsome rancher from Saskatchewan. But can they salvage Cartwright’s career from the brink?

Sean and Patrick McConaghy are two young cousins who set sail from their native Ireland, in 1820, and after a long and eventful passage across the Atlantic Ocean they tackle the mighty St. Lawrence River with a band of rugged Voyageurs.

Eventually settling in the wilderness of Upper Canada, they begin to carve a homestead when love blossoms between them. This, too, is a voyage of discovery at a time when same-sex relationships were subject to humiliation and death. More…

Coming of Age on the Trail 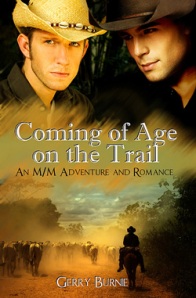 LOOSELY based on Norman Lee’s 1898 cattle drive from southern British Columbia to Canada’s remote Yukon Territory, this fictional version pits 17-year-old Cory Twilingate against an almost insurmountable wilderness in order to save his father’s cash-strapped ranch. Accompanying him on this epic venture is ranch foreman, “Reb” Coltrane, a ruggedly handsome cowboy from Texas, and compelled by the unrelenting rigors of the trail they inevitably bond like two Theban warriors battling against a common foe.

The Theban warrior analogy is apt, for hovering in the background is an ancient prophecy given to two Sacred Band warrior-lovers, separated at the time of their deaths, but to whom Apollo has promised eternal life if or when they should ever be re-united.

Also hovering in the background are two sinister villains intent on using Cory and Reb’s loving but forbidden relationship to blackmail Spencer Twilingate, Cory’s father, out of his forty-thousand-acre Prodigal Son Ranch.

Can cowboys, Theban warriors, mythical gods, scheming villains,  and an unfulfilled ancient prophecy mix? You’ll have to read the story to find out. http://comingofagenovel.ca